Bigger is better. Height makes might. The good big man beats the good little man. More than ever, these maxims apply to pro tennis today. Daniil Medvedev and Alexander Zverev, both 6’6” tall, look likely to dethrone Novak Djokovic in 2022 or 2023. In the US Open final, No. 2-ranked Medvedev foiled Djokovic’s bid for a Grand Slam, while Zverev captured the gold medal at the Tokyo Olympics and overpowered Medvedev in the final of the ATP Finals. 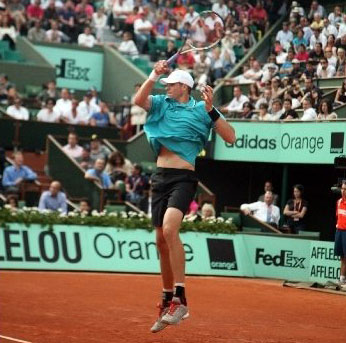 What makes these rising New Gen stars so effective is that they can play defense as well as offense. They’re quick, flexible, and agile. And they have the athleticism and racket skills to defuse opponents’ offense and turn defense into offense.

If you’re over 6-feet tall, are you taking full advantage of your superior height and reach? Do you have a powerful serve, aggressive groundstrokes, and an intimidating net game? If you’re medium or small in stature, have you figured out ways to play David and slay Goliath?

Several of the chapters in the Tactics section of The Fein Points of Tennis offer tips for both tall and small players. Check out these tips and learn how you can unleash your talent, whatever your size and playing style.